Ayia Napa sea port as well as Nissi beach was contaminated with TPH (Total Petroleum Hydrocarbons) and associated pathogen microorganisms. This is caused by the heavy movement of boats entering and exiting the port, and also motor and oil spills while refueling their vessels.

The end result is a polluted port, with foggy waters, with increased toxic algae bloom and very little to none aquatic life. As for Nissi beach the water is filthier and full of seaweeds which is repelling to the visitors.

Ayia Napa Municipality entrusted VTW to undertake both of these projects. Samples were collected at the weakest points with the least water circulation in the port plus at the surface water of the Nissi beach.

The results showed contamination of TPH and associated pathogen microorganisms. In just a period of 6 months VTW managed to achieve 99,48% reductions in the TPH levels, resulting in a significant drop of pollutants within the marine water column and restoration of aquatic life. As for Nissi beach the water became clear again and there were less seaweeds which made the beach attractive again for visitors.
Table: Results of Ayia Napa Port after 6 moths of treatment 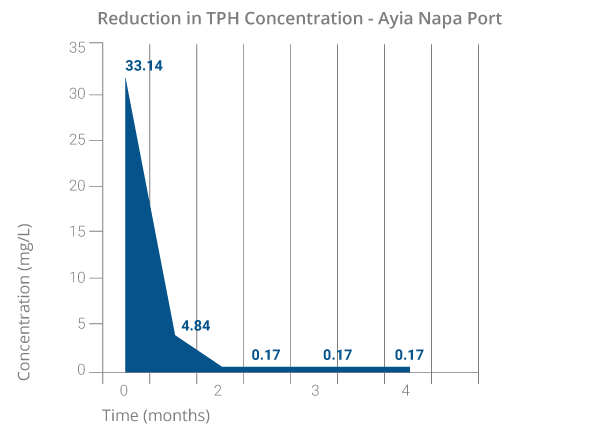