Limassol Marina opened its doors on the 19th of June 2014. It is considered to be the most high-end Marina in Cyprus, consisting of various busy restaurants and shops all year round. In just 3 years the Limassol Marina, after our samples was contaminated with TPH.

This is caused by materials such as paints, solvents, used oil, motor fuel and solid waste which harm the environment and people if they are not properly managed. It is safe to say that the extravagant number of tourists during summer periods also results in additional contamination caused by heavy movements of boats entering and exiting the marina as well as sewage contamination.

The end result is to prevent the pollution of the Limassol marina by maintaining the water column and its aquatic eco system.

The results showed a slight contamination of TPH and in order to prevent this from escalating, we proposed to establish a water treatment management in Limassol Marina in order to clean all existing pollution. In addition the results showed contamination from BOD (Biochemical oxygen demand) and COD an index of water pollution by organics and is a bellwether parameter for seawater quality discharge. In just a period of 2 months VTW managed to achieve 30% reductions in the TPH levels as well as the BOD and COD levels, resulting in a significant drop of pollutants within the marine water column.
Table1: Results showcasing reduction of COD Levels 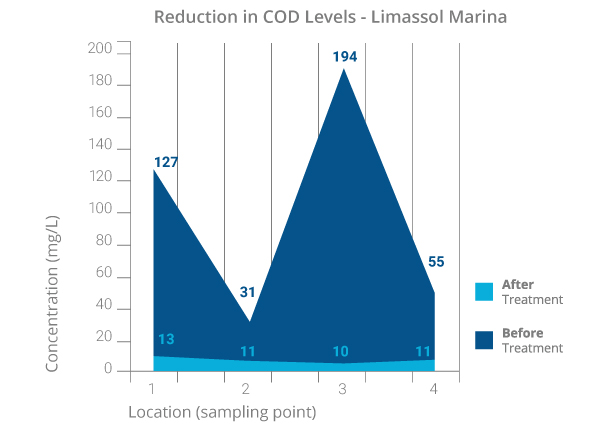 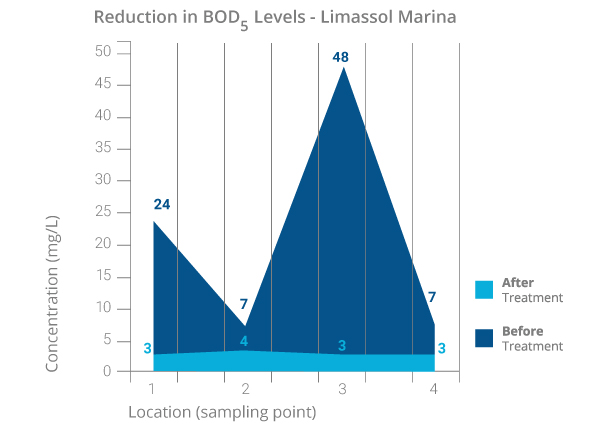