A study carried out in the fall of 2015, by the Cyprus University of Technology (CUT),
identified possible sources of pollution in the Limassol sea, such as waste disposal from
ships off the coast, petroleum hydrocarbons from the ports and marina and oil and fish
waste from the local fisheries.

The Limassol Municipality gave its consent in June 2016 for VTW to treat the coastal waters.

Water samples were collected from several water spots/points along the coast, both before and after treatment, and were analysed.

Treatment was carried out twice, in the span of 2 weeks, along a predetermined sea route beside and parallel to the coast, at a distance of about 200 meters from the coastline.

Application of the formula was carried out by spraying the water surface from a specially equipped boat.

The formula has been shown to act as a dispersant, resulting in cleaner water, reducing levels of TPH and associated pathogen microorganisms, through dispersion of hydrocarbon molecules over the polluted water surface.

Analysis results have demonstrated the effectiveness of our water treatment formula in reducing/eliminating TPH pollution and, as an added consequence, achieving significant reduction in associated bacterial pathogen levels.

In light of these results, the CUT researchers have suggested that, in addition to other measures being taken, a program of regular treatment with our formula should be set up by the Limassol Municipality.

Table: Results of Limassol Sea from 8 sample locations prior to and after treatment 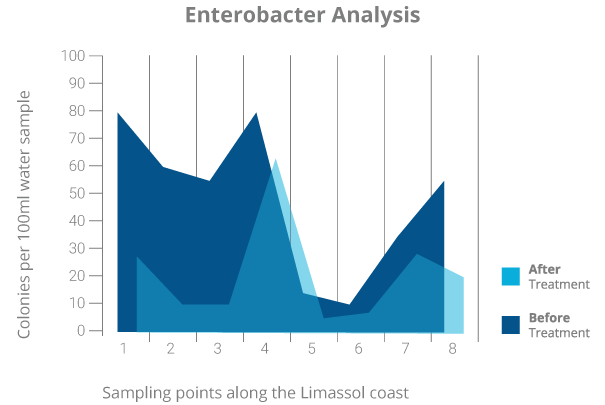